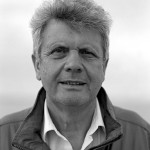 John trained in Aberdeen and has worked in Denmark and England before joining the St. Andrews Architectural practice Walker and Pride. In 1983 John became a partner in the firm and four years later principal of the practice until its sale in 2011. During this period projects varied from small residential buildings to University laboratories and lecture theatres. Many projects were in conservation areas and comprised the restoration and refurbishment of listed buildings.

Edward Clydesdale Thomson graduated with a Master’s Degree from the Piet Zwart Institute in Rotterdam and a BArch from the Glasgow School of Art. From 2011 to 2012, he was a resident at the Rijksakademie van Beeldende Kunsten in Amsterdam; and in 2011 he won the Lecturis Award and was nominated for the Prix de Rome. In 2013 he was resident at iaspis, Stockholm and in 2014 at the Irish Museum of Modern Art, Dublin. Edward Clydesdale Thomson’s work was shown in the solo exhibition Causa Finalis (2012) at Galerie Fons Welters, Amsterdam; the Prix de Rome 2011; SMART Project Space, Amsterdam; and Secret Gardens (2012), TENT, Rotterdam. Nothin’ Shakin’ but the leaves on the trees, Marabouparken, Sweden (2015).